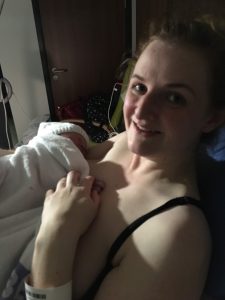 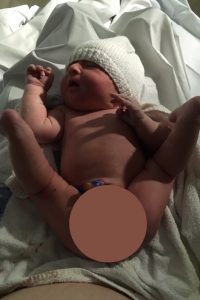 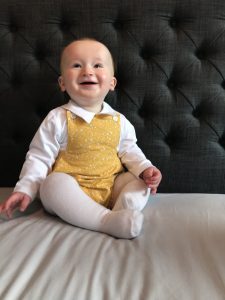 A planned home water birth of a breech baby at 20 days past due date.

“My first thought was to try and turn my baby, so I met with an acupuncturist and did moxibustion for a few days, but my heart wasn’t really in it. I had a feeling that this was my baby’s position of preference. The thought of just letting things be brought me peace, so I decided to stop attempting to turn him. ”

“Twenty minutes later I gasped “he’s here!”, as I felt his bottom “crown”. I’ll never forget the feeling; I cupped my hand around what felt like a soft peach coming out of me. I had read that there is usually a pause between the body and the head emerging, but that was not the case for us! The whole of his body and his head came out in one push! (one long, loud push!)

I scooped him up from the water onto my chest and asked him to breathe. After a couple minutes he did, but I wasn’t worried during this time, he was getting enough oxygen from the cord. I got out of the bath and walked into our bedroom. I couldn’t believe it! He was finally here! All nine pounds of him, so beautiful, and no trace of a conehead of course, having come out breech.”

“I am so thankful for the way things happened. I gave birth normally, naturally, intact (and no tear) and in harmony with my baby.”

A planned home breech water birth at 20 days past due date, supported by independent midwives.

” I’ll never forget the feeling; I cupped my hand around what felt like a soft peach coming out of me. I had read that there is usually a pause between the body and the head emerging, but that was not the case for us! The whole of his body and his head came out in one push! (one long, loud push!)”