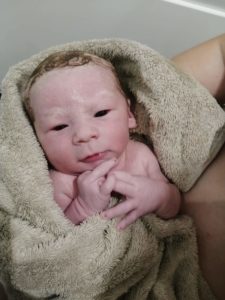 A story of many breeches, from the midwife’s own birth as a footling breech baby in WWII, to others she has attended during her career…

“The best part of the story is the old doctor’s instructions for when to call, i.e., how to tell when the time was right. His first instruction was to do nothing! and see if labor goes away. Then eat bread and butter (still my favorite food) and drink beer, and then do nothing! He instructed my mother that when the labor got so intense that she thought she couldn’t take it anymore, she should go for a walk in the garden or the hallways of the cloister with one of the nuns. He told her to do some slight breathing during contractions and lean on the wall, the fence or a nun. After that she should again do nothing!

He further advised that if she thought she couldn’t do anything anymore she should lie down on her left side with two pillows between her legs and do nothing! At this point he said she should tell the nuns to feed the donkey. When the donkey was full, they should hitch the wagon to the donkey and go get the doctor. He told her when he got to the cloister he would eat some food, have some beer and check in with her and that he would still have lots of time to prepare for the birth.”

“The children said I “screamed a bit”, but I felt every centimetre of my baby descending, and I could hold the growing pressure in my vagina, without contracting against it. In this way, progress was very quick — two or three pushes, and not even a strong stretching feeling, and I said, “I’m crowning”. One more push and “Here’s the head”. Yet strangely I had no feeling of my push finishing easily at the baby’s neck.”

“We were in candlelight, and I was tucked into the darkest corner of the spa bath. Nicholas had a torch ready, and he shone it into the water to check the baby. “It’s a foot”, he said. I turned, my baby still half in my body, and saw a left leg waving in the water. Nicholas leant down — I still don’t know how did it without getting wet — and freed the other leg, which was straight against her belly, held only by the foot.”

“Standing with ease, I leaned forward, my hands supporting her slippery little legs and bottom, and, without waiting for the next wave, I pushed. Out came her chest, arms spilling out, cord tumbling and tangled, then lastly, with one push, her head. I scooped her up into my arms, to the warmth of my heart. She was like a little bundle of kelp; floppy, blue and not breathing. (The children said later “We thought she was a dead baby”.) “We love you, baby, we love you,” they cried, calling her in. After twenty or thirty seconds — it seemed longer, but Nicholas was watching her closely — she opened one eye, squeaked, and took a breath, pinking up straight away.”

“Everything seemed to be going well, and at two weeks out the baby dropped. I have to admit, right before the baby dropped, I thought there was a chance she had changed positions, but being it was a first for me I didn’t speak up and let Annette know. A word for the wise…

“I couldn’t have been more grateful with how smoothly things went considering the circumstances. I am so thankful Annette knew exactly how to handle things. Looking back I would not change a thing. If I would have known Emsley was breech, I would have been tempted to go the medical route and more than likely I would have ended up with a C-section. I am now even more confident about having a home birth as I head into it for a second time.”

“What was most interesting to me was that my contractions never got closer together than 3 minutes. This was part of the reason we held off calling the midwife because both Artene and I thought we still had quite a bit of time left to go.”

“On the next contraction, Joseph’s first foot popped out and I was completely shocked. I didn’t even feel him coming down the birth canal since, you know, feet are so much smaller and more slender than a gigantic HEAD, so the foot was a total shock to me.”

“I could NOT believe what had just happened. We had planned a home birth and everything was perfect. Then, in less than 12 hours, we found out he was breech, I went into labor, and we birthed a breech baby at home without our midwife there (which is known in the birthing world as an “unassisted” birth).”

An amazing sequence of photos showing a hands-off hands-and-knees breech birth with the baby’s knee presenting first. Delayed cord clamping allows the cord to refill after being stretched during the birth.

A planned c-section for an awkward breech with one foot up and one foot down, and a family history of breech (with a video):

“I don’t feel guilty about doing it, though. There were no doctors or midwives on the island who would deliver a breech baby. Giving her position, I wasn’t going to risk doing it by myself. In the head, we weighed our options and felt fairly in control of the whole process. Still, I feel some disappointment in missing out of the experience that I was envisioning, though I hope with our next baby we can have a home birth after cesarean.”

“My double footling baby B from my triplet home birth in 2006.”

“Max is the one on the right with the little purple foot. His one foot was fairly bruised from funky positioning for a few days.”