So after a lot of thinking I have decided to share my pregnancy story in the hope it helps other mummies and daddies to be. 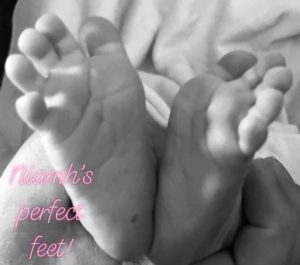 I found out I was pregnant with my sixth child and me and my husband were over the moon. We decided to have our baby in Lewisham Birth Centre and couldn’t wait till the day came when we got to meet our bundle of joy. Everything was going according to plan – we had our 12 week scan and baby had a strong heartbeat and was growing lovely. Me, my husband and our children were so happy to see her.

Then we had our 20 week scan and found out we were having a girl and were so happy – we had our name picked. Baby Niamh was due on the 9/9/19. We were all so excited – we couldn’t wait to meet baby Niamh to see who she looked like, what colour eyes she would have, what colour hair she would have. We then had our 32 week scan and baby Niamh was breech. We weren’t worried as at this stage there was still time for baby Niamh to turn.

So at 36 weeks I went to see my amazing midwife and she then told me that baby Niamh was still breech. I had to have a scan just to make sure baby was breech and talk through my options. So I went for my scan the next day and was told baby Niamh was definitely breech and there were a few choices I had. The choices were talk to a consultant about a cesarean, or try an ECV (external cephalic version) to try and turn baby Niamh, or have a breech vaginal birth, but there was no way I could have my baby in the birth centre. So I went away feeling a bit worried about a breech baby and disappointed that I couldn’t have Niamh in the birth centre, but I was looking forward to talking through my options with a consultant.

At 37 weeks I had an ECV to try and turn baby Niamh – she was monitored constantly to make sure her heart rate didn’t drop but her bum was firmly in place in my pelvis and they couldn’t move her. So I had a scan at 38 weeks just to see if baby Niamh was still breech. She was so I saw a consultant/senior doctor. This was such a bad experience I cried and cried after this appointment feeling worried I was going to be putting my baby at risk if I went ahead with a breech birth and then on the other hand I was putting myself at risk if I had a cesarean. I was booked in for a cesarean for the 7/9/19, 2 days before my due day and really wasn’t looking forward to major surgery as I had 5 other children.

I then spoke to my midwife as I was so unhappy about my consultant appointment. My midwife phoned me and spoke to me for a while trying to calm me down and talk me through things. She then said that she wanted me to speak to her manager (a lovely lady) so she passed my details on to her manager and told her what had happened. Her manager then phoned me and asked me to go in and see her. We spoke about a cesarean and also a breech birth. She made me feel a bit better about it all. I was still nervous but feeling better.

She also phoned the labour ward to see if they could fit me in for another ECV. Which they did so I went along to try and get baby Niamh turned again. Sadly it was unsuccessful again. Niamh’s bum was firmly in place in my pelvis and wanted to be born breech (cheeky baby). I was then trying everything I could to get baby Niamh moving so I could have a breech birth but nothing seemed to work, she was just too comfy.

It then came the day 5/9/19 to have my pre-assessment for my cesarean so I went along to Lewisham Hospital to have my bloods taken and find out what time I had to be in on the day of my cesarean. The midwife I saw was absolutely amazing – she asked me if I was 100% sure I wanted a cesarean. I said no I didn’t want it but baby Niamh didn’t want to move. The midwife then asked me if I wanted to push back the date of my cesarean to give Niamh more time to come naturally so of course I said yes and was so happy so my cesarean was now booked for the 9/9/19 my due day.

I asked if I could have a sweep as it worked with my last daughter. So in came a matron (absolutely lovely) and I had a sweep and she said she could feel baby Niamh’s bum so I was excited things might start moving soon. I then went home and drank more raspberry leaf tea, bounced on my ball, went for walks, but still baby Niamh didn’t want to move. So on the 7/9/19 I went back to the hospital for my pre assessment. When I got there I saw the same midwives again, had my pre assessment done and also had another sweep in the hope it would work.

Then on the 8/9/19 my waters broke. I was so happy I phoned the hospital and off I went to give birth to my breech baby. I was still a bit nervous as I have never given birth breech before but it was just as simple as a normal (head down) birth. The midwife on the labour ward knew about baby Niamh being breech and talked me through who would be in the room when I gave birth.

Then the time was here to push. Her bum was coming, then her legs came, then her arms, then the final push and she was in my arms. All the worry was over. She was here safe and sound and perfect. I gave birth to a breech baby. I was fine and healthy and baby Niamh Fionnuala was finally here happy and healthy.

It was such an amazing experience I would do it all over again. I’m so proud to say I gave birth to a breech baby and to share my amazing story with you. I hope this helps some mummies to be feel at ease with a breech birth.

Stay positive you can do it. Good luck!