I read so many posts and comments with great interest after finding out my baby was breech just before Christmas. I found the birth stories in particular so useful and reassuring so wanted to share mine!

I have a bicornuate uterus so knew all along that I was more likely to have a breech baby as they can run out of space to turn. I had a presentation scan at 36 weeks because of this, and he was head down so I thought we’d got away with it. At 37+5 I felt like the movements had changed and just had a feeling he might have turned so went to triage to be checked out. Sure enough it was confirmed that he was breech (footling according to the sonographer) and I was given the choice of a vaginal breech birth or a c-section. I spoke to a lot of people and asked a lot of questions, but ultimately wanted to avoid a c section if at all possible so opted to try for a vaginal breech birth. 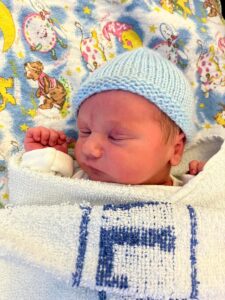 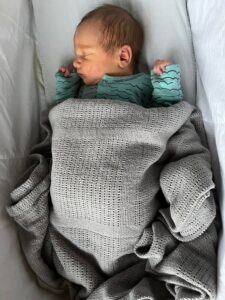 I ended up back in triage with reduced movements at 39+2 and while everything looked fine on the monitor, I still wasn’t feeling as much as I had been (I think baby had moved position slightly by this point which may have been why). A doctor convinced me that a c-section would be the best option and scheduled it for the following day. I got to the hospital the next morning and after waiting for 5 hours we were told that it had been rescheduled due to staff shortages and would now be 3 days later, so at 39+6. When we got to the hospital on the rescheduled date, I was put on the monitor and during the hour it was on, started having tightenings which were becoming more regular and more noticeable. A doctor came to review and agreed it looked like I was in early labour, so wanted to get on with the c-section asap. I asked if this meant I could reconsider a vaginal delivery (the main risk I’d been worried about was going into labour at home and something going wrong, but I was in the hospital now so felt more confident). I was rescanned by a very supportive consultant who said baby was now flexed breech, with his bottom presenting first, so we agreed to cancel the c section and wait for things to progress naturally.

The tightenings continued for the next 24 hours, getting slightly more intense and remaining regular at about every 4-5 minutes. At about 1am on the day after my due date I was woken by the tightenings and started trying to time them but kept drifting back off to sleep so gave up. At 4am they woke me again and seemed more intense so I timed them over the next 2 hours and they were every 3.5 mins lasting 1-1.5 mins so I called my midwife who said to come in to triage. After we got there at about 7:30am I was examined and to everyone’s surprise I was fully dilated! I was still managing well with breathing through the tightenings so couldn’t believe it. I was taken across to labour ward and we waited for things to progress further. Over the next hour or two things got a lot more intense and the tightenings were harder to breathe through so I tried some gas and air but didn’t feel like it did very much for me. At about 9:30am (timings get a bit hazy here!) my midwife asked if I could try to go to the toilet. I felt a pop and my waters started to trickle, then they went with a big gush when I got back to the bed. The midwife examined me and said she could see a foot was coming first and that it was time to push so I knelt leaning over the back of the bed. I think I was pushing for about 15 minutes in total before our little boy Oliver arrived safely, one foot first, at 9:54am on 06/01/2022 weighing 7lbs8oz, followed very swiftly by the placenta.

This was all SUCH a positive experience and I am so glad I stuck to my instincts and pushed (pun not intended!) for the delivery I knew I wanted and could have. Huge thanks have to go to Amy Meadowcroft from Oldham Hospital who was the most amazingly supportive midwife I could ever have hoped for, I definitely wouldn’t have felt able to get through all of this without her.