I wasn’t sure if I should tell my story as people always say to me you have been though the mill but I did not feel that way at all as I have an amazing beautiful happy baby and I know I made all the right choices for my birth. 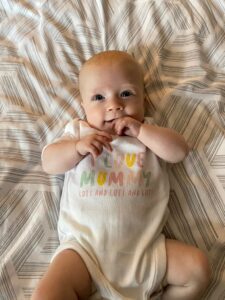 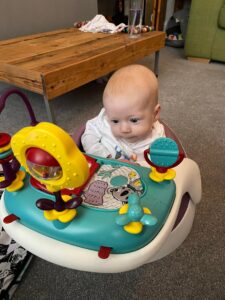 When I found out I was pregnant the doctor referred me for therapy with regards to my needle phobia. I had a session most weeks before my birth and this really helped me along with the hypnobirthing course to get though my pregnancy as I never feared birth, I feared blood tests, injections and cannulas. I would use my affirmations when I had to have any needles to keep me calm. ( I have even used them now when having the covid jab and further blood tests after birth).

I had the usual morning sickness 7 weeks till 16 weeks (but it was all day) – thank god for the 3rd lockdown so I was working from home.

I suffered with insomnia most of my pregnancy but I’m not a big sleeper so I managed fine with the tiredness.
At my 20 week scan we found out the placenta was low laying and we were having a girl 👧

I had already started the Positive Birth Course and affirmations so it really kept me calm and helped me not to worry too much.

At 28 weeks I woke in the night and had been bleeding heavily. I calmly went to the hospital and was monitored for a few hours till the bleed stopped. I was admitted as a precaution and went for a scan – they said that the placenta had moved and in the process they think it caused a vein to rip and cause the bleed. I stayed in hospital for 36 hours and had some steroid jabs just in case of early labour. But everything was fine. 😀 The only part of the whole process I found upsetting was when they gave me leaflets on if my baby came before 30 weeks and I read them when I was very tired!

I went for a scan at 32 weeks and they confirmed that the baby was frank breech but my midwives said that there was plenty of time for turning.

At 34 weeks I had a little wobble and went to the midwife as I was worried about her not turning and wanted to know what I could do. They told me that the baby was head down and to not worry till 36 weeks.

36 weeks… The same midwife told me the baby was still breech, I was so upset (and pretty pissed off) but they put me straight under the consultant at the Jessops hospital and she was amazing!

An ECV was attempted at 37 weeks but my little girl was not moving! I used my affirmations and felt it was meant to be so embraced the breech and was no longer worried about it all.

At this point I was offered a c-section at 39 weeks or a scan to check I could go for VBB (vaginal breech birth). I opted for the scan.

39 weeks scan all was well and good for VBB. As you cannot be induced with a breech baby I had a c-section booked in for 41+5 which gave me time for labour to start naturally.

40+1 – first sweep – I chose to have the sweep to see what stage my body was at. My cervix was closed.

40+5 – 2nd sweep – cervix was still long but starting to open up. I made the decision this was my last sweep now I knew things where moving along.

41+1 – I had decided to go for reflexology as it had been recommended to help relax especially if I was to need the c-section.

That morning some of my plug had come away so I was a little excited but I knew that it could still be a few days. The reflexology was amazing and so calming, after this I went for a walk and lunch with my mum and then went home to lay watching movies. At 4pm I was 10 minutes from the end of Rocketman (yes I was singing along the whole film) and I decided to sit on my ball. A few bounces in and I felt a pop and a gush. My waters and my plug had gone. Thank goodness we have a downstairs toilet as I managed to get there without making too much of a mess. You know how they say your waters don’t go in the movies… well mine did.

I shouted to my partner who luckily works from home to help me clean up and get me some clean clothes. At this point I did not have any contractions so I called the hospital who were mega busy. They said to make my way to the hospital and they would check me over. As they were so busy I asked if we could have our tea first! Tea of champions… Chicken nuggets and chips 😂

At 6pm my mum came and took us down to the hospital. I had started to get mild back ache. After an hour waiting to be seen my contractions had started to get stronger and I needed my up breathing while tracking on the Freya app. While waiting I felt a gush again and had to ask for some pads as my partner was outside with my bag which had all my stuff in. (Bloody covid)

When I went to change I had a major shock… it was all dark. It was meconium. Now no one had warned me about this with breech. When a baby is breech the contractions can cause it to go to the toilet … a-lot!!! Obviously I knew if it was in waters it was dangerous to the baby but that’s just if baby is head down. But when the baby is head up it’s normal and nothing to be worried about. It’s very unglamorous!

I was monitored for the first hour to check the baby was ok and contractions were about 1 every 15 minutes. At about 8pm they examined me and I was only 1cm. They took me off the monitor and said I would need to stay and be checked again in a few hours. We set up some music and went though the affirmations. I was offered some tablets at about 9pm but I had started being sick from the contraction pain so they came back up as quickly as they went down. For about 2 hours my contractions were about 2 in 10 minutes and really strong in my back. I found I just needed to walk around a lot and really use my up breathing as I couldn’t find a position which helped. I tried a ball, on all fours and even sitting on the loo but all I could do was bend over and breath.

At just before midnight I was examined again as my contractions were every 2 minutes for a while and I still had not had any drugs! I was now 6cm so they moved me over to a consultant led room where I was given gas and air … I was so happy .. literally! I was put back on the monitor and I now could not move around. I just talked loads of rubbish and laughed.

Now this is where things started to go fast and a little fuzzy due to the gas and air.

I was examined some time after 1am and I was 10cm. I was so excited as I knew it meant action stations… We practiced going on all fours but the babies heart rate dropped. Midwife pressed the panic button and the room filled. They wanted me to try again and they would watch the monitor. Same happened again and they said they needed to prep for a c-section. I used my BRAIN and asked for them to hold off a little longer and to let’s see what happened but in the mean time I had numbing cream put on my hands for the cannula as I had a massive phobia.

A few more contractions passed and we tried again, the heart rate dropped and took some time to come back up. The consultant said to try on my side but the same happened again.

I now started to feel more pressure down below. They asked me to attempt to push if I felt the need but all I could now feel was the baby moving up rather then down.

I agreed to go for the c-section. Everything moved so fast but I was so calm as I knew I was going to meet my baby. I thought I would be scared but I really wasn’t.

I did shout at the anaesthetist though as he went to wash his hands and I wanted the cannula putting in as I wasn’t having any contractions (oops).

While I laid there with my partner at my head we were chatting and I didn’t even know they had started and I heard someone say “hello little girl”.

She was here! They took her off to be checked and clear her lungs – it did feel like a lifetime but she cried after a few seconds and they wrapped her up and brought her over to us. 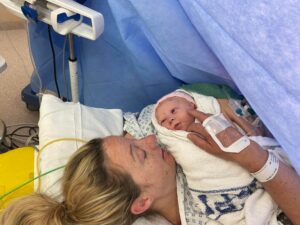 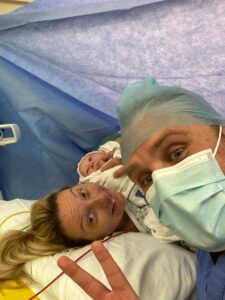 She was put on my chest and we chatted away to her while they finished closing up.

It was all so fast but so amazing.

She could not have delayed cord cutting as they found bruising on the cord. I was fine with this as it was what was best for her at that moment.

She was perfect and all fine!

When they were closing up they found I had some bleeding and had to fit me with a drain. That stayed in for 24 hours and all the fluid had stopped coming out.

One bit of advice. If you have blood loss and they offer you blood or iron… take the blood!!!I went for Iron as I didn’t realise how low my HB levels where and it meant I was more tired then I should have been after a c-section.

Now this is where I went a little down hill. I ended up going back into hospital a few days later as my internal bleeding had pooled and caused a hemotoma. I was admitted and given 2 blood transfusions and 3 days of IV antibiotics. While it was very strange being in the hospital I was so well looked after and had my little girl with me so we got to bond so much and the midwives were so helpful. 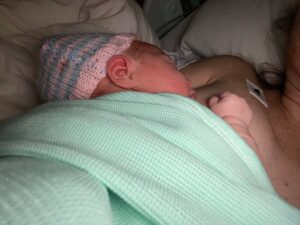 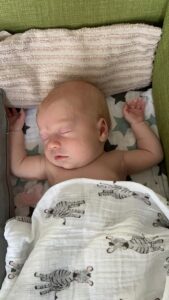 While the healing process has taken me a lot longer then expected I have to say all the things that scared and worried me before having a baby were all not as bad as I expected.

I still use the golden light affirmation now to help with stressful mummy times.

My little girl is 5 months now and I love every minute I spend with her. She’s a healthy weight and I’m so lucky I was able to breastfeed even while being so poorly. She’s still breastfeeding now and we are getting ready to start our weaning journey.

Her birth was nothing like I pictured or planned but it was all the right choices especially after they measured her head size as the 98th centile after being born and with being breech her head getting stuck was my main worry.

She is a happy and healthy little girl who is my whole world. 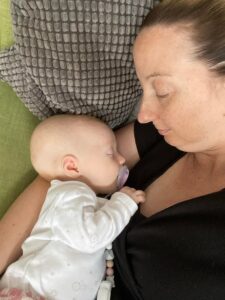 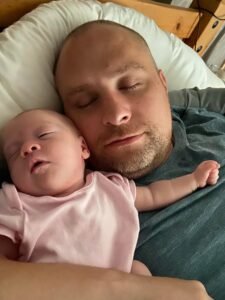